Latest data and analysis related to COVID-19 in Gloucestershire

Catch up on the latest data and analysis related to COVID-19 in Gloucestershire.

COVID19 intelligence is important to ensure we understand the direct and indirect impact of COVID19 on the population of Gloucestershire.

The BETA COVID-19 DASHBOARD is updated daily and provides information about cases of coronavirus and deaths associated with coronavirus at a county and district level.

* Please note if you are using internet explorer you may have problems viewing the dashboard. In this instance try using another browser, e.g Chrome, Firefox, Opera, Edge. If the webpage works, please ignore the message.

The COVID19 weekly data summary displays statistics on cases of coronavirus and deaths associated with coronavirus in Gloucestershire. 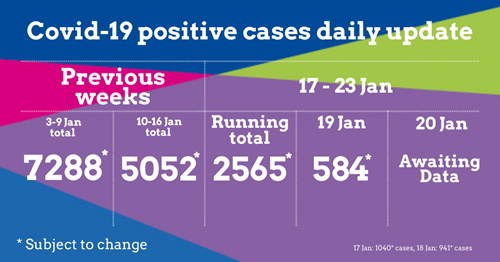 The dashboard includes information about total cases and rates per 100,000 populations by nation, region, Upper Tier Local Authority (such as Gloucestershire) and Lower Tier Local Authority (such as districts). The interactive map shows rates or numbers of cases in each area. When rates are shown, the density of the colour indicates how high the rate is: darker colours mean higher rates. Selecting an area on the map highlights the area in the table to the left.

* Please note if you are using internet explorer you may have problems viewing the dashboard. In this instance try using another browser, e.g Chrome, Firefox, Opera, Edge. If the webpage works, please ignore the message.

These figures are from tests carried out in Public Health England labs/NHS (Pillar 1) and other testing routes, such as mobile labs (Pillar 2).

COVID-19 cases are identified by taking specimens from people and sending these specimens to laboratories around the UK to be tested. If the test is positive, this is a referred to as a lab-confirmed case. This data refers to tests carried out under Pillar 1 and Pillar 2 testing.

Data may be subject to delays in case confirmation and reporting, as well as ongoing data cleaning.Data is based on the date of specimen rather than the result of the test.

The different Nations, Regions, UTLAs and LTLAs vary enormously in population size. Areas with larger populations will tend to have more cases than those with smaller populations. To account for the different population sizes, rates are calculated. The count for each area is divided by the total population and multiplied by 100,000. Populations are the 2018 Mid-year estimates from the Office for National Statistics.

The rates are easier to compare than the raw counts, but they do not take into account other factors that may affect the numbers of cases, such as the age of the population or the amount of testing carried out. 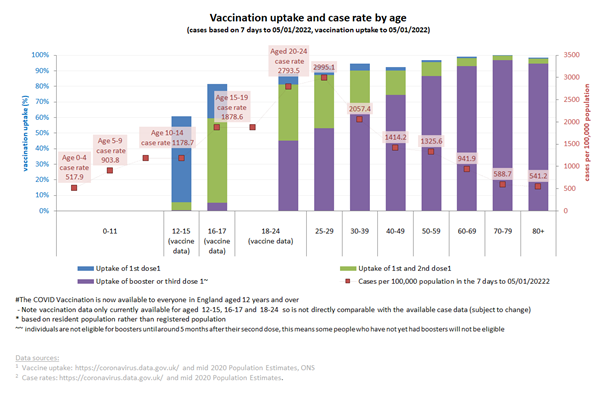 Cases data is based on figures published by the Department of Health and Social Care and ONS. Further information is available here: https://coronavirus.data.gov.uk/details/about-data#england
Vaccination rates are presented by vaccination date. Percentage uptake by vaccination date is calculated by dividing the total number of vaccinations given to people aged 12 and over by the number of people aged 12 and over according to the Mid 2020 Population Estimates, ONS. This differs from some sources which calculates vaccination rates by dividing the number of people vaccinated by population data from another source.

The number of people vaccinated in England is based on vaccinations reported in NIMS which is the system of record for the vaccination programme in England. Only people who have an NHS number and are currently alive are included. Vaccinations to England residents that were given outside of England are included if they have been recorded in NIMS.

Did you find what you were looking for?